The Collapse of Crypto: Why is Bitcoin crashing?

DISCLAIMER: None of the following is intended to be investment advice. Also, full disclosure, my links to Coinbase, Binance, KuCoin etc., include referrals. It actually benefits you to use them because we will both get an extra $10 worth of BTC for free if you deposit at least $100 to Coinbase. Thanks in advance if you follow the links when you make your accounts - and even if you don’t, I hope you find this article useful! Remember: Always do your own research. This is not financial advice, so do not make any purchases or sales based on the opinions written on this website.

The sky is falling. The Bitcoin price apocalypse has come. Or has it? It’s been awhile since I’ve written an article (I’ve been focusing on my YouTube channel instead!) but all the hubbub lately has forced my hand. It’s time to talk about the turmoil in Bitcoin land.

What you’re looking at is the price chart for the last week - Bitcoin has fallen from about $6,300 to $4,800 and the price may still be in freefall. What is it that caused this 20%+ drop? Well, Jeff John Roberts of Fortune recently published an article which details three possible reasons - let’s start by evaluating them.

The SEC comes out to play

In his article, Mr. Roberts first brings up the SEC’s recent announcement which described how two ICO issuers have settled charges related to the unregistered sale of securities. Predictably, various dopey journalists immediately started delightedly referring to this as a “crackdown” on crypto. Mr. Roberts, however, has this to say about it:

This development might be enough to spook some crypto investors, but it hardly come as a surprise. Anyone paying attention to the regulatory space knew this was coming, and so much of the fallout should have been priced into crypto token prices already.

Not only do I concur with this statement, I’d go one step further: this is good for Bitcoin, and I think people are smart enough to realize it. As regulation and rules becomes less nebulous, the world of cryptocurrency becomes more palatable to your average investor. I don’t think the SEC’s so-called crackdown has much to do with the current downturn in the market - and if it does, it’s a short-term issue at worst.

The fork occurring over in Bitcoin Cash land has people spooked. A hash war has broken out between two factions - ABC (with big-name supporters such as Jihan Wu and Roger Ver) and SV (run by Craig Wright and his company nChain). The lengthy names involved in this fork have led to some pretty baffling tweets: 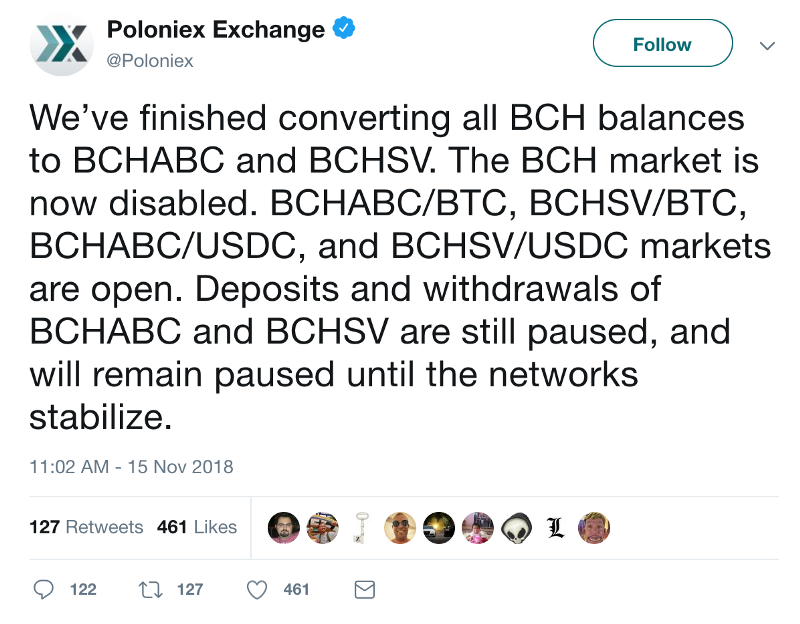 I usually try not to get too deep into the politics of any situation, but in this case I’m just going to come right out and say it: I think Craig Wright is basically a narcissistic conman who got tired of people refusing to take him seriously, and thus BCHSV is his way of taking his ball and going home. Remember that this is a guy who has famously claimed to be (part of) Satoshi Nakamoto but failed to publicly prove it - instead insisting on the same sort of private demonstration that various types of conmen have relied on for centuries.

I definitely believe you can bend spoons with your mind, guy. Image attribution: By Guy Bavli, CC BY-SA 3.0, https://commons.wikimedia.org/w/index.php?curid=11965083

Jeff John Roberts’s Fortune article has this to say:

But Bitcoin Cash has always been dodgy and dysfunctional, and the crypto world has weathered forks before, so it’s hard to see how this triggered the crash.

Here, I must dissent. There is a hash war going on. This is meaningful because Bitcoin’s “hash function” - that is, the underlying math that its Proof of Work algorithm is based on - is the same as Bitcoin Cash. It’s all SHA256-based! The same sort of ASICs (specialized mining machines) that mine BTC can mine BCH (or perhaps I should now say BTC, BCHABC, and BCHSV). I think that drawing mining power into a pointless and costly “hash war” has had and will continue to have an impact on the Bitcoin price for a variety of reasons.

For Craig Wright’s part, he’s also doing his best to emulate a James Bond villain - and this sort of thing can definitely have an impact on people’s confidence in the market. More importantly, he has threatened - and probably has followed through on - dumping massive amounts of BTC onto the market to tank the price and fund his temper tantrum hash war: 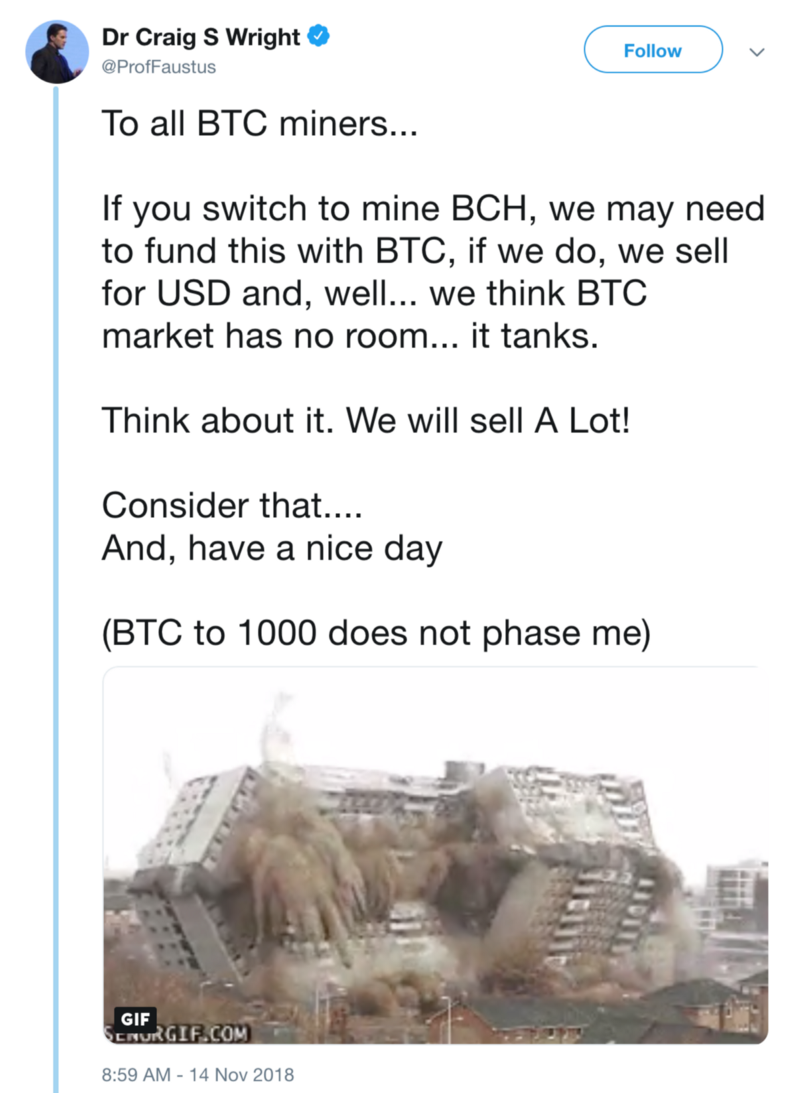 How Not To Get Taken Seriously Ever Again by Craig S. Wright

Both sides of this hash war are mining at a loss. Both sides are selling their BTC to fund this war. This is definitely a factor, if not the root cause, of the current depressed BTC price.

Jeff John Roberts’s final point is that Nvidia and Advanced Micro Devices (AMD - or, as some people jokingly call them, Advanced Money Destroyer) have both reported steep declines in their sales. His evaluation is that this is sort of a chicken-and-egg situation - that is, that this may very well be a result of the price-decline of cryptocurrencies, not a cause. This seems like the most likely option to me.

One big option Mr. Roberts left out of his article is Tether. I’ve written an article and produced a video on this topic - but the long story short is that some people believe that the market has been heavily manipulated by Bitfinex and the printing of Tethers. I have no comment on this other than that I don’t trust Tether and I do think it’s possible that this has had an impact. If you have strong feelings on it, put your money where your mouth is - if Bitfinex truly is insolvent, it seems reasonable to say that Tether’s peg will be completely destroyed within the next year.

Unless you think Bitcoin is going away forever - I don’t - this is nothing more than another buying opportunity. I’ve been into cryptocurrencies for a very long time - long before it the hype of late 2017 and early 2018. For people with my experience, it’s easy to zoom out on the chart and relax. The good news is even if you’re new to cryptocurrency, you can do this too! Let’s try it now:

Bitcoin was worth a thousand dollars two years ago.

At $5,000, we are still over 500% from where we were two years ago. Bitcoin could dump to $3,000 and we’d still be over 300% from where we were two years ago. Wild-eyed speculators seem to have this impression that cryptocurrencies are a magic money-making machine which only go up in value - that they function as a sort of casino where you put fiat money in and later get more fiat money out. They’re missing the point. If you’re like me, you invested in Bitcoin because you believed in an underlying ideal - the principle of censorship-resistant, global money which is free from the creeping tendrils of any government or organization.