about | support | contact | projects | shop | archive |
· Totally new to Bitcoin? Start here! ·
< Previous Next >
The modern-day version of a book burning — something that the Nazis did regularly— is deplatforming. The dreadful irony of it is that the…

The Deplatforming Continues: Patreon as a Fascist Company

The modern-day version of a book burning - something that the Nazis did regularly— is deplatforming. The dreadful irony of it is that the ones being deplatformed are constantly derided as Nazis, but day by day it seems more like any sort of dissident is being targeted. Be warned: if you stand up against the cartel-style soft monopoly in Silicon Valley, its iron fist might come down hard on your civil rights. It's time to start asking ourselves a very simple question: are companies like Patreon the new Nazis? Mark Kern, a well-known game designer who was the team lead for vanilla World of Warcraft, summed it up very well: 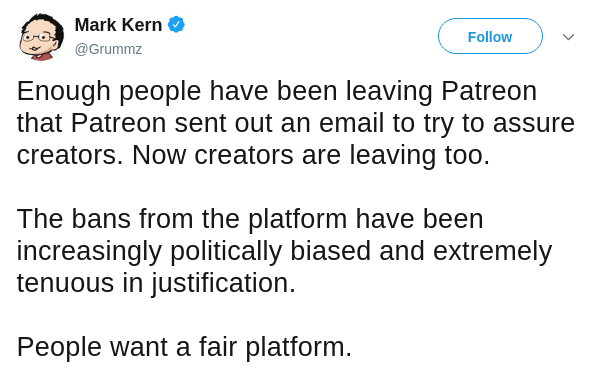 Let’s back up a minute. What is this all about?

Sargon of Akkad - real name Carl Benjamin - is an online influencer who speaks about political topics, such as classical liberalism and GamerGate. Sargon has the wrong politics. They’re wrong, that is, from the standpoint of those in Silicon Valley - people who are almost invariably extremely far left and anti-free-speech. He is undoubtedly a controversial guy and is most well known for his antifeminist views.

On December 6th, 2018, he was banned from Patreon. This is a pretty big deal. He was earning over $12,000 a month on the platform - a six figure salary! A few days before this, Milo Yiannopolous was also removed. Suffice to say that Patreon is on the political warpath, intent on eliminating political dissidents from its platform. Here’s the big question you should be asking yourself about all of this: in what world does it make sense that this fruitcake should be the arbitrator of whether or not someone can have a livelihood? 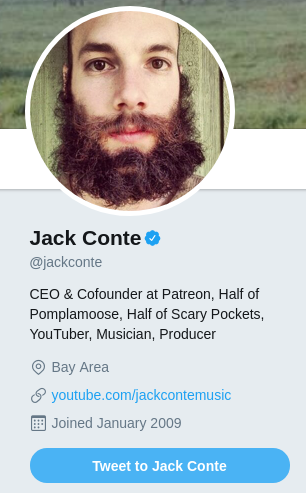 Almost as creepy looking as Zuckerberg, but not quite.

Note that there’s no free market to run to here. Free speech oriented Patreon alternatives like Hatreon and SubscribeStar tend to get brutally stomped out by the cartel-style monopoly in both Silicon Valley and the financial world. It’s a sort of wombo combo - Google makes sure you don’t show up on the rankings, the bank card associations or the payment processors down the line make sure you can’t take credit cards, and on and on the great threshing engine goes as it chews up all of our civil rights.

To their credit, Patreon did respond to this controversy - although they took their sweet time doing it. 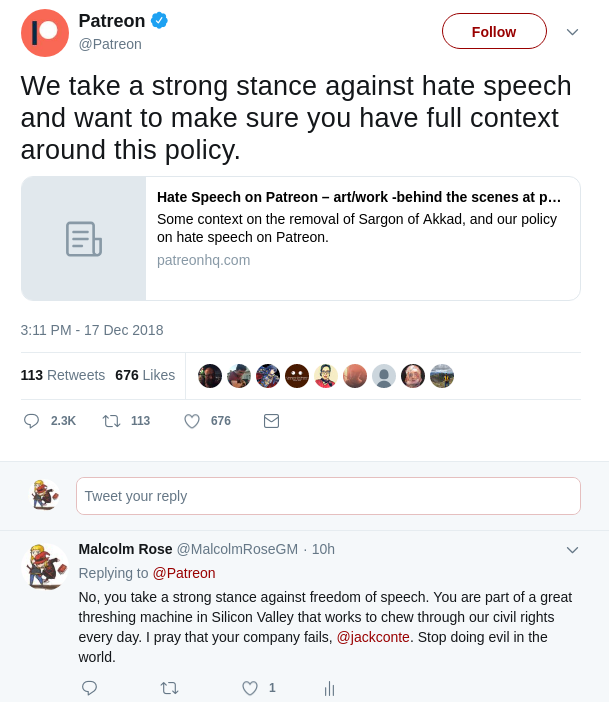 I like to call people like this “empty suits.” People who work in HR or on Orwellian “Trust & Safety” teams are actually worse than useless - they actively make the world a more hellish place. Imagine having a job where you’re paid to act as a sort of modern-day Internet Gestapo!

Medium, by the way, is the same blogging site which unceremoniously censored me before the creation of my website. Of course, it’s unlikely that they’d ever treat one of their friends in the Silicon Valley oligopoly in the same nasty way, no matter how much Patreon spits on its own customers. I digress. I’m going to take her response piece by piece:

Some creators and patrons have questions regarding our removal of Sargon of Akkad for hate speech. We take a strong stance against hate speech and want to make sure everyone has the full context regarding this removal.

Translation from corporate-speak: “We would have ignored this indefinitely, but our behavior was so noxious that it’s actually causing an enormous number of people to flee our platform so now we have to try to stem the financial bloodflow. Whoops!”

In an interview on another creator’s YouTube channel, Sargon said:

“I just can’t be bothered with people who chose to treat me like this. It’s really annoying. Like, I - . You’re acting like a bunch of n*****s, just so you know. You act like white n*****s. Exactly how you describe black people acting is the impression I get dealing with the Alt Right. I’m really, I’m just not in the mood to deal with this kind of disrespect.”

“Look, you carry on, but don’t expect me to then have a debate with one of your f**gots.…Like why would I bother?…Maybe you’re just acting like a n****r, mate? Have you considered that? Do you think white people act like this? White people are meant to be polite and respectful to one another, and you guys can’t even act like white people, it’s really amazing to me.”

Okay, this seems fairly boorish and nasty at a glance. Of course, like the late great George Carlin always said, “context is everything.” The context here is that Sargon was addressing the “alt-right” (whatever that means - I’m still unsure) and using language that they themselves might understand. There’s a point being made in an extremely ungraceful way here, and it’s pretty clearly not one of racial hatred. It seems quite a lot more like crass sarcasm to me.

It doesn’t really matter, though. Sargon is essentially a harmless dope, but even if he was being outright racist - he wasn’t - the existence of his livelihood still shouldn’t be decided by a handful of authoritarian creeps in Silicon Valley.

Some people worry that we are reviewing content not posted on Patreon. As a funding platform, we don’t host much content, but we help fund creations across the internet. As a result, we review creations posted on other platforms that are funded through Patreon. Sargon is well known for his collaborations with other creators and so we apply our community guidelines to those collaborations, including this interview.

Blah, blah. Translation: the thought police are watching you no matter where you are. Don’t step out of line or your livelihood is forfeit.

In our Community Guidelines, we state that we don’t allow hate speech. Part of how we define hate speech in those policies is:

“Hate speech includes serious attacks, or even negative generalizations, of people based on their race [and] sexual orientation.”

The whole concept of “hate speech” has always seemed silly to me. The definition changes from person to person and never makes sense in a consistent way. Jacqueline Hart’s take on it, for example, fails to account for context. Have we fallen so far as a society that we have to sacrifice comedy, satire, or even basic sarcasm on the altar of political correctness? What about simple facts? Here’s a negative generalization: homosexual men have far more STDs than heterosexual ones. The same is true of Blacks versus Whites. Am I a horrific bigot for saying this, or did I just look at the CDC’s website? Where is the line drawn?

In this case, Sargon used racial slurs to insult others and specifically linked those slurs with negative generalizations of behavior, in contrast to how people of other races act. He also used a slur related to sexual orientation to generally insult others.

Taken in whole, with all of the context, this violates our community guidelines.

I found this part of Jacqueline Hart’s response pretty cute. This sort of lazy acknowledgement that some people think that the concept of “hate speech” is silly, while doubling down on Sargon definitely being a big bad wrongthinking hate speech racist. The takeaway is that context doesn’t seem to ever matter unless you have the right politics, in which case context suddenly matters quite a lot, or is even twisted to be as favorable as possible.

Look no further than Sarah Jeong if you don’t believe me! She is a journalist whose very nasty racist tweets were uncovered after she took a position at the New York Times. The media fell all over itself to endlessly excuse her actions, offering up the (mostly inaccurate) context that she was merely defending herself from online bullies and bigots. 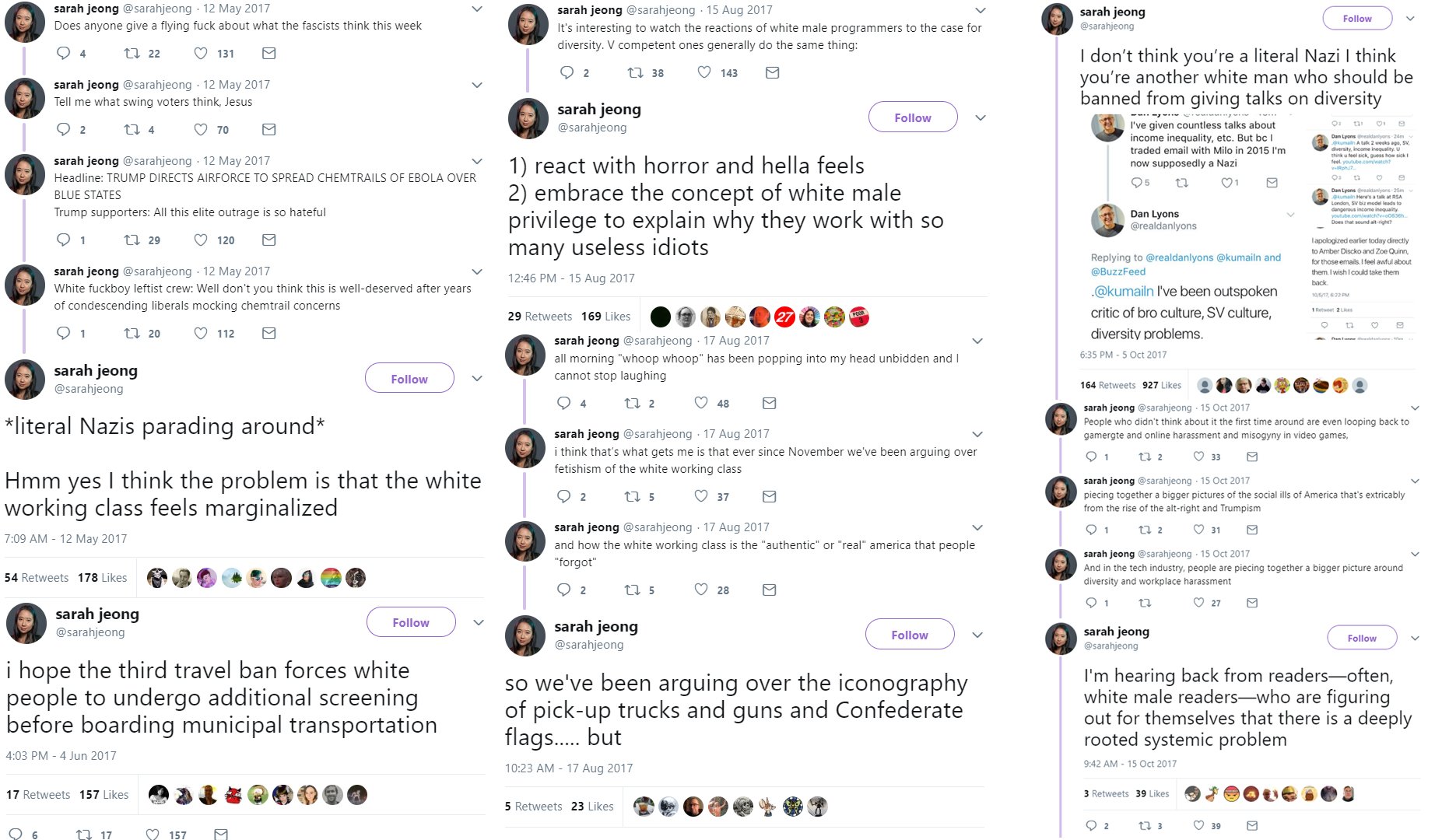 This abhorrent woman has a job at the New York Times. No deplatforming for her!

In the end it’s deeply troubling - and Orwellian - that Patreon’s Jacqueline Hart had the audacity to mention wanting people to have the “full context” when it’s crystal clear that they simply do not care about the context. War is peace, freedom is slavery, ignorance is strength, up is down, right is left. Welcome to dystopia.

What can be done?

This is obviously a sorry state of affairs, one that I’ve been talking about for as long as this site has existed. What is it that can be done to fix it, if anything?

I maintain that cryptocurrency is the only viable long-term solution to these problems. Human beings are fallible and will always perform censorship and form monopolies - or cartel-style soft monopolies like Silicon Valley - to viciously defend their power. Distributed networks are far less vulnerable to this sort of thing. If you don’t own any Bitcoin, I’d urge you to learn about it, make accounts at Coinbase and Binance, and consider purchasing cryptocurrencies immediately. By purchasing cryptocurrency, you aren’t just supporting freedom of speech in a vague way, you are effectively buying a stake in it.

In the short term, there are other wheels in motion. Earlier I mentioned that SubscribeStar - a tiny Patreon alternative - was essentially being bullied out of business by their payment processors. They haven’t thrown up the white flag. They posted that they are “working tirelessly for all of us being able to secure our future without fear of being bullied by the crooks in corporate suits and their subservient weasels.” Well-put - I am behind them 100%.

Jordan Peterson is a professor of psychology and online personality who has over 7,500 patrons on Patreon. He’s hidden the amount of money that he gets per month from these people, but in the past when it was around 6,000 patrons, he was supposedly making about $50,000 per month. He’s announced that, due to the deplatforming of Sargon, he will be launching an alternate crowdfunding platform which is “not susceptible to arbitrary censorship.” I don’t see how this is possible without cryptocurrency, but perhaps it will incorporate it somehow.

Gab has also announced that they are working on an alternative. Best of luck to them.

As soon as one of these alternatives comes up and seems viable, I will be closing down my Patreon account and moving there. If you have a Patreon account, I urge you to close it in support of freedom of speech. These people do not care about your civil rights. Do not reward them with your money.

Know of any other hot-button issues with freedom of speech, deplatforming, or cryptocurrencies? Want me to write about them? Let me know! I love to hear feedback from people and get ideas on what topics I should research. You never know, I might even write an article about your suggestion!

If you’re new to cryptocurrencies, don’t worry - it’s easy to get in on this! Remember that Bitcoin is the only viable long-term solution to Silicon Valley crushing our freedom of speech. Here are the basic steps if you’re interested in Bitcoin or altcoins: