about | support | contact | projects | shop | archive |
· Totally new to Bitcoin? Start here! ·
< Previous Next >
All right, the title has successfully clickbaited you and now you’re wondering when this crypto blog became a political blog. Well, I’ve…

The One Where CBS Encourages People to Assassinate President Trump

All right, the title has successfully clickbaited you and now you’re wondering when this crypto blog became a political blog. Well, I’ve tried my best to avoid getting political, but sometimes the world gets so absurd that I have to say something about it. This is also deeply related to my interest in freedom of speech and how speech-restricting social media rules get inconsistently enforced based on what politics you have. Confused about what I’m talking about? Let’s back up a minute. Let’s start here: 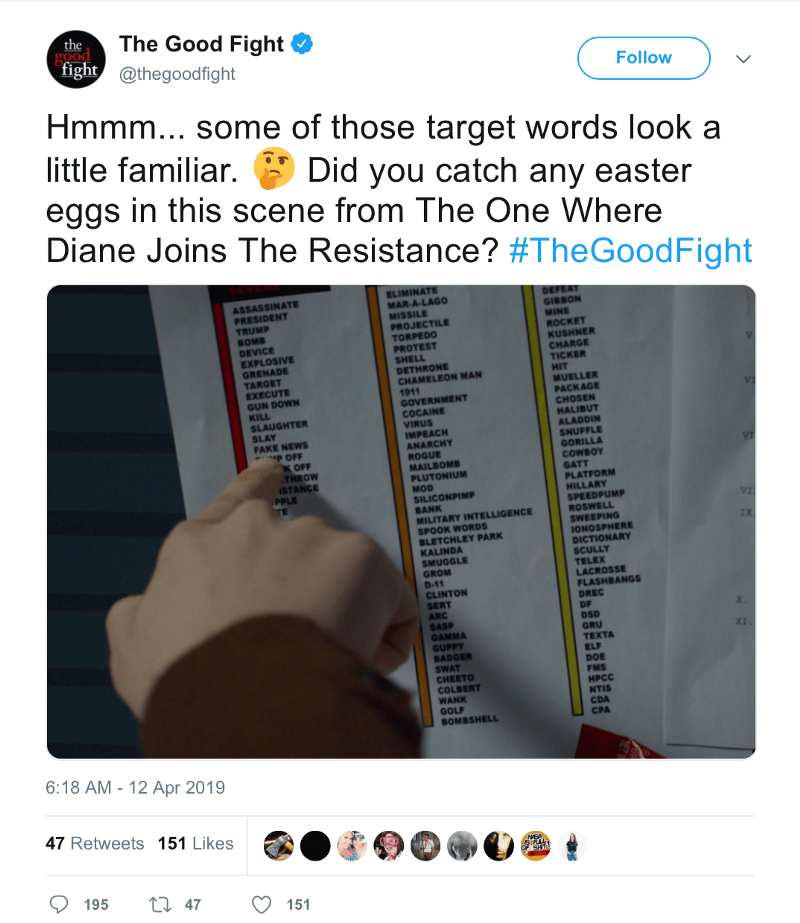 Look at the first three words at the top left. Whoops! Did you just tweet a threat against the life of a sitting president?

At what point did civil discourse break down? At what point did this kind of thing become acceptable? This isn’t some random jerkoff on the internet. This is a company with a nearly twenty-billion dollar market capitalization screaming (or snidely whispering, if you want to be generous) “kill the president” into your ear.

The Good Fight is political propaganda masquerading as a television show. Recently the promoters of this show have gotten increasingly bold with this sort of thing, going so far as to directly call attention to so-called easter eggs in the above tweet. “Easter eggs” sound like a cute phrase until you realize that, in this case, it’s talking about phrases like “assassinate President Trump” and “eliminate Mar-a-Lago.”

On top of this, they’ve also recently published this video of a character in their show. I’ll let it speak for itself:

Sorry about the bad acting, not my fault.

Here is a transcript, if you are unable to watch:

Is it all right to hit a Nazi unprovoked?

I was always taught to never throw the first punch. Never instigate. Defend, don’t attack. But then I saw a video of the white nationalist, Richard Spencer, being punched in the face during an interview and I realized - Spencer was in a pressed suit, wearing a tie, being interviewed like his opinion mattered. Like he should be considered part of the conversation, like Neo-Nazism was just one political point of view.

And then I realized there’s no better way to show some speech is not equal. Some speech requires a more visceral response. It’s like Overton’s Window. That’s the term from which ideas are tolerated in public discourse. Well, Overton’s Window doesn’t mean shit unless it comes with some enforcement. So yeah, this is enforcement.

Throughout the video there are flashing police sirens, fist fights, and an irate black man preaching stentorian about how wonderful it is to beat people up for their political beliefs. After the “It’s time to punch a few Nazis” line is delivered at the end, we’re treated to visuals of a man with a baseball bat jumping on a police car and smashing it while his compatriots rough people up. I’m not really sure what one could call this entire thing other than a thinly veiled call to violence.

Earlier in this article I asked a simple question: “At what point did civil discourse break down?” There was once a time when you could think someone is an idiot or disagree with them without thinking it’s justifiable to try to maim or kill them. Think Richard Spencer is an idiot or a douchebag? Sure, fine - I don’t think many people would disagree with you, even in the so-called “alt-right.” He still has a right to free speech. He still has a right not to have violence visited upon him.

I want to make it clear that we’re not just talking about literal “Neo-Nazis,” by the way. Unless your head has been underneath the earth for the last few years, you’re probably well aware that the “Nazi” pejorative gets hurled like a knife against people for all kinds of reasons. Hell, I’ve been called a Nazi for supporting freedom of speech. It seems like a bad joke, but this is the world we live in today. What CBS is saying here isn’t just “punch Nazis.” It’s “punch anyone who has a political belief I don’t like.” Again: this is a literal call to violence with the thin veneer of fiction slapped on top of it. Let’s not pretend it’s anything else.

Could it just be a marketing gimmick?

Sure. It’s possible that they are doing this stuff specifically to get a reaction. Perhaps the goal was to drum up controversy and get people to write about it; if so, I guess they got me - hook, line, and sinker. That’s not really the point, though. The point is that if people with a different set of politics were doing this, they would already have their social media accounts disabled.

Picture, if you will, a television show run by somebody like Roseanne Barr. In its promotional material it makes winking references to assassinating Barack Obama and bombing his house. It also posts videos of characters from the show making impassioned speeches about how it’s morally justifiable to sucker punch “communists,” by which they really mean any and all leftists. Do you think that it’s remotely possible that such a television show would be allowed to have a Twitter account? It wouldn’t. Of course it wouldn’t.

Not only is The Good Fight’s reprehensible speech allowed on Twitter, its account is blue-check-mark “verified,” which is often a sign of being in Twitter’s good graces. In effect, Twitter is directly endorsing this speech.

To be fair: both the “assassinate President Trump” tweet and the “punch Nazis” video tweet have been deleted since they were first posted. It’s unclear if CBS did this or if Twitter did. For my money, I’m guessing that CBS did it themselves when they saw that there was a massive backlash against them.

Even if Twitter removed the tweets, this is still an example of selective enforcement. They still have an account, after all. It’s possible for this company to post thinly veiled calls to violence - calls to assassinate the sitting president of the United States, even! - and Twitter does nothing. Meanwhile, Twitter regularly takes down the accounts of people on the other side of the political aisle for a variety of nebulous reasons.

What’s this all about?

The bottom line is this: if you’re like me and you believe in free speech, it shouldn’t matter whether you are conservative, liberal, or something else entirely. Look, I don’t even care what your politics are. I just like to think that it’s possible for people to have a conversation without murdering each other in the street over it. How about “I disapprove of what you say, but I will defend to the death your right to say it” - does anyone remember that? Crickets.

The name of the modern political game is to silence your political opponents through force, and I can’t help but notice that the extreme left has more power to do that in the current year. Sometimes “force” means a Twitter ban. Sometimes it means you get thrown out of places or get your nose broken because you have the audacity to wear a MAGA hat in public. What people tend to forget is that it wasn’t that long ago that various leftist causes were being censored in similar ways. For example, imagine being openly “pro gay marriage” in 1950s America. What do you think would happen?

The point is that the pendulum always swings. Don’t be so quick to celebrate when the cudgel of censorship comes crashing down on your political enemies. That same cudgel will be used against you in time. American society is built upon freedom of expression - it was so important to our founding fathers that it was enshrined at the very top of the bill of rights.

Unfortunately, the question I keep asking myself is this: do high-minded concepts like freedom of speech matter in a world where billion dollar corporations are allowed to encourage people to beat each other in the streets? Day by day, I see civility breaking down both on the streets and on the Internet. As much as I hope it doesn’t happen, I wouldn’t be surprised to see wide-scale civil unrest in my lifetime if this continues. When conversation becomes impossible, violence becomes inevitable.

PS: According to a recent Deadline article by Nellie Andreeva and Bruce Haring, the easter egg was supposed to be a person’s name from a show made by the same people - “Kalinda” - rather than “assassinate President Trump.” Decide for yourself if you’d like to call bullshit on that.

Want to do your part to support freedom of speech? Buy Bitcoin. It’s free speech money. No one can ever be truly financially deplatformed for their political beliefs when they’re accepting cryptocurrencies. It won’t protect you from getting punched by a thug in the street, but you could use it to buy MMA lessons.